Here are the results of our poll for the most influential womyn of 2013.

While this poll definitely doesn’t include every important womyn that did extraordinarily brave things this year, I think our readers’ votes shined some light on what projects and causes  that were important for 2013.

I’m super impressed by y’all, especially because Beyoncé isn’t number one. While Queen Bey made some amazing music, I definitely agree that there were womyn who caused a lot more change than thought. All in all, this poll really means a lot for 2014. Now, to talk about our top 6:

Our number one influential womyn, Jazz, is a proud 12 year old transgender girl who became a role model for many young people by speaking out about her experiences at her young age, after she successfully changed the U.S. Soccer Federation’s policy on the exclusion of transgender players.

Laverne Cox, the actress who plays the character Sophia Burset in Orange is the New Black, has been a major advocate for transgender visibility. This year, she worked on a documentary about CeCe McDonald. While it’s not her job to educate the public, she does a damn good job of doing so.

Tatyana Fazlalizadeh was the artist behind the “Stop Telling Women to Smile” campaign. We needed these posters, before we even knew their catch phrases. Walking through a city had always been a struggle, and these posters gave womyn a chance to heckle back. The rise of this campaign lead to many newly educated people on the harm of street harassment. Thank you, Fazlalizadeh. We needed this. 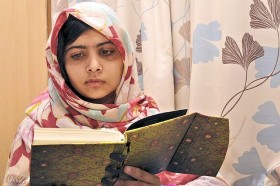 Malala is a household name, after she became one of the hardest educational activists in the world. She has seen an extraordinary amount of success in 2013, and it is extraordinarily well deserved. Malala has survived and thrived from much more than anyone could expect a child to. She has created visibility to the downfalls of the education system around the world.

Beyoncé brought feminism into the front lines by releasing the biggest surprise of all of 2013. ***Flawless is everyone’s favorite song to get pretty to, or, ya know, just wake up like this. She slayed the game with her lack of promotion and then domination of the music charts. By creating one of the most worldwide, popular forms of feminism, she is opening a dialogue larger than life. Her feminist statements are too loud to ignore.

Janet Mock is the writer who launched the #GurlsLikeUs movement for the visibility of trans womyn. Mock has made Transgender Day of Remembrance a huge part of her cause. She wrote about her transition for Marie Claire magazine, which gave transgender womyn a representative in popular media.

Happy New Year, bitches. I hope you’re drunk, happy, and fighting for a cause! Also, remember to kiss the cutest person in the room at midnight for us! xoxo

Our contributors, editors, and social media team volunteer their time to bring you fresh new content. Once a month, we donate all proceeds from ad  revenue and donations to a featured charity or organization. You can donate via Paypal to RoseWaterMag@gmail.com